The roots of Zlotnick Construction are forever linked to America's "Greatest Generation" through the efforts of George Zlotnick. 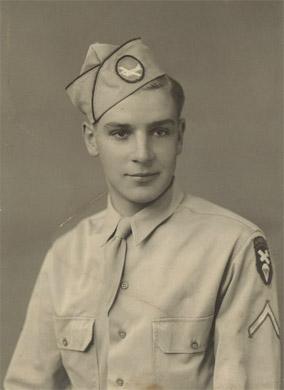 George was a member of the elite 17th Airborne division that jumped behind enemy lines on March 24th, 1945 in Wesel Germany as part of Operation Varsity, the largest airborne assault in history.  In 1948, after returning to Ashford, CT, George began his construction company from humble beginnings – assembling small outbuildings, chicken coops and barns for local farmers.  George’s work ethic developed his enterprise into a profitable business supplemented by the money earned from his two chicken farms. The home farm was sadly ravaged by a tornado in 1957.  With no insurance and only the help of family and friends, George rebuilt all that was destroyed while maintaining his contracting endeavor.  Following the tornado, in 1958 George recognized the need to incorporate the business and formally made the company into Zlotnick Construction Incorporated.

He operated the construction company and two farms with the help of his beloved wife Zenia, and two sons, Gregory and Peter, throughout the 1950’s and 60’s.  George’s eldest son, Gregory, graduated from the University of Connecticut in 1972 with a Civil Engineering degree and quickly assumed the responsibility as President and CEO of the company.

Tragically, in 1975, Peter was killed by a drunk driver just a half of a mile away from home.  The company survived the hardship but it shaped the dynamic of the family and business forever.  Progressing under the new leadership of Gregory, Zlotnick Construction acquired larger clients and completed a wider range of project types.  Throughout this period of growth, Zlotnick Construction developed relationships with some of the largest companies in New England and completed projects for companies such as Wakefern Food Corp., Finast Corp., Dunkin Donuts, Burger Chef, Staples, and Natchaug Hospital.

In the 1990’s, Zlotnick Construction continued to fortify and expand its network and complete projects for key clients such as Pfizer, Foxwoods, Cigna, and Pratt & Whitney. The company prides itself on not only developing business relationships, but more importantly friendships.  This is made evident by the longevity of our relationships and the quantity of repeat business with our customers. Our partnerships – such as with developer Samuels & Associates, from the mid 1970’s to the present – exemplify our core values of character, honesty, and integrity.

Throughout the 2000’s, relationships with companies such as Walmart, Costco, Big Y, BJ’s Wholesale Club, and Price Chopper have illustrated our ability to handle large commercial operations in a timely, efficient, and safe manner.  Our reputation with religious, medical, and educational firms demonstrates the reverence and discreetness of our entire staff that is required to finish such projects.

Presently, Zlotnick Construction has been sustained by our reputation as being one of the foremost contractors in New England.  Our adherence to core values, established over 70 years ago, has laid the foundation for a company ready and able to survive in a turbulent economy.

It is our vision and challenge to continue the legacy of character, honesty, and bold innovation as passed on from each generation before us, while striving to strengthen the ideals of our industry, our community and our world.